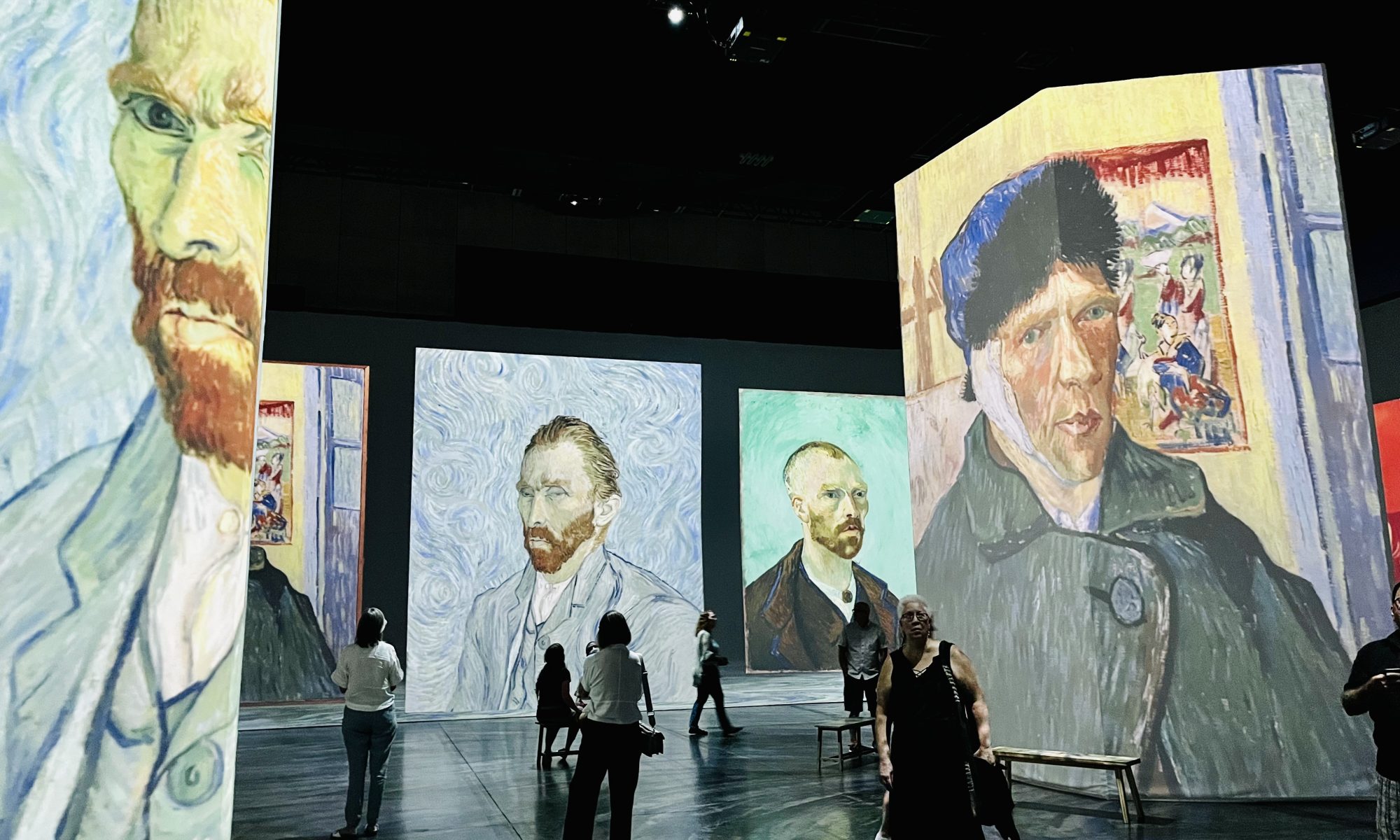 When I was in high school, we were asked to read a biography or autobiography and present that person’s life story as if we were them. Immediately, I wanted to be Vincent van Gogh. His work touched me deeply, and while I knew little about his life other than the notorious ear incident, I felt like my soul knew his. The closest I can come to compare was a modern-day celebrity crush where you are certain if you met in person, you would become fast friends.

I still feel that way.

I chose to read Dear Theo: The Autobiography of Vincent van Gogh and a deeper love for this man was born. He is not only a visual artist but an artist of words. Every night after painting, he sat down and poured his soul into his letters to his brother.

Reading his words, I felt his overwhelming perceptions of beauty in the world countering his grief and pain. His words somehow reflected my philosophies on nature and humanity.

In 2016, we were able to visit the Musée d’Orsay in Paris. There is a room there filled only with Van Gogh’s paintings. I never wanted to leave. I stood so close that I could see his brush strokes. He had created these textures on canvas. He had stood in front of a blank page and left a small part of his overflowing soul.

I cried in that museum room, surrounded by the work of this artist.

And so when I first heard of the immersive Van Gogh exhibit, I dreamed of one day going. At first, it was only being offered in a warehouse in Paris. I dreamed of hopping on a flight and disappearing for a few hours into the world of Vincent.

It was an unrealistic dream; I knew I wasn’t going to run off to Paris, but it was still a dream.

And then Covid came. The world shut down. There were no flights to Paris, even if it were a reality.

When Immersive Van Gogh came to Los Angeles, I knew it was finally a possibility. We found tickets over Christmas 2021 and made a mini vacation of it. I knew, taking my husband and daughter, that they would not have the enthusiasm that I did. I knew they would not want to linger the way I would.

I knew that it would be a balancing act of experiencing everything I could without forcing an unreasonable amount of time on my family.

When the day arrived, we walked down the long dark hallway, quietly through crooked frames is if we were entering his world; which essentially we were. At the end of the hallway was one of his paintings, Starry Night Over the Rhone. His unique way of showing light reflected on the water.

As we left the hallway, we entered a room with a wall of sunflowers and folded letters from Vincent twisted up across the ceiling. A replica of The Night Cafe had been constructed in a small side room. Interactive computers told the story of his life and created a letter from him to you. Music poured through nearby doors, a mix of classical and French, leading you to the immersion of light and sound and color.

As we entered the warehouse, I became a part of Van Gogh’s world. There were circles painted on the ground and we were given cushions to sit on. This was one way of keeping six feet of distance while Covid restrictions were a part of our daily life.

There were a few benches scattered around the room in two warehouse spaces; the same progression of music and images in each with a balcony looking over the larger of the rooms.

For me, I just wanted to sit in one spot without moving; one complete time through the exhibition. I wanted to see the whole story they created. I wished I had a journal or drawing pad to express what I felt. I knew, that if I ever came back, I would want to come alone with unlimited time and something to write with.

In the elevated space, they had a single wall that showed the whole presentation in its full panoramic perspective without distortion.

When I saw that Beyond Van Gogh was being offered in Fresno, not far from where my sister lives, I decided to go again. While I offered to take my sister and daughter, they understood that I would be taking my journal this time with no timeline. They each declined.

What I did not expect is a completely different presentation. I have learned that there are no less than five different companies producing versions of the Van Gogh experience. The Immersive Van Gogh by Massimiliano Siccardi is the version we saw in Los Angeles and is the original French design that began in Paris. The Fresno Beyond Van Gogh is one of several traveling shows that move from city to city.

In Fresno, I first entered a room filled with panels telling the story of Van Gogh’s life; a beautiful introduction to the man and the artist he was. The room was dark and the panels were full of light and color. They led to a transition room, before the warehouse space, that dripped paint and color as well as his portrait, giving a sense of the movement his paintings reflect.

Entering the warehouse space, there were signs telling visitors not to sit on the floor. There were a few benches around pillars, but mostly, people were standing. Because I came towards the final dates of Beyond Van Gogh in the Fresno location, it was fairly empty. My sister, who had gone when the exhibit first opened, said the standing crowds made it difficult to really see the presentation in its entirety.

The ability to sit on the floor in Los Angeles allowed everyone a clear and uninterrupted view.

I found a bench and once again watched the entire presentation through.

While beautiful, this version had a very different feel. In Los Angeles, there was a darkness to Vincent’s story. The music and images reflected his depth of humanity as well as the beauty of his work. The music accompanying the images matched the energy of where he was in his life; whether that was a space of darkness or hope. In Fresno, the images felt more like a retrospective of an artist’s life. The music was classical and light in nature. Fresno also had a greater focus on Van Gogh’s words.

While both experiences were beautiful and essential in their own right, I appreciated the depth of emotion that Los Angeles gave. Fresno gave me a new appreciation of Vincent’s words and takes me back to his letters to Theo.

From my journal in Fresno

When I see Van Gogh’s work, I am reminded that I am not alone in my sensitivities. When I read his words, I understand that I see the world how he did. I do not think this makes me unique or special in any way. It is that a few in this world see the intensity of dark and light differently.

There was a quote in the first room, where Vincent asked his brother, when they saw each other again, he would like to know what his brother saw. He should like to know if they saw things in the same way. I understand what he means in that: I believe I see the world much as he did, and I often feel alone in that.

I cry when I see his work. the strokes of his paintbrush. I understand the depth of his emotions when looking at his world; the grief that is expressed in color, the pain, and the beauty. His soul cried out in the beauty of it all. The color of a leaf touched him.

He loved deeply but it also caused him such deep turmoil.

I would like to explore flowers and faces the way he has.

Differences from LA–this [Fresno] is much lighter in tone. It is more painterly and classical. The music is uplifting and does less to take us into the depths of his despair. LA took on the darker tones of Van Gogh’s life and allowed some of his grief and pain. The music was often heavier and with more drama. The movement of the art is also different. LA gave us more of his life story by often (but not always) moving in a more linear direction. The art here is more content driven, with locations, styles, portraits, landscapes, and still lifes. LA felt more like a passage of time. Fresno feels like a body of work.

A bit about me