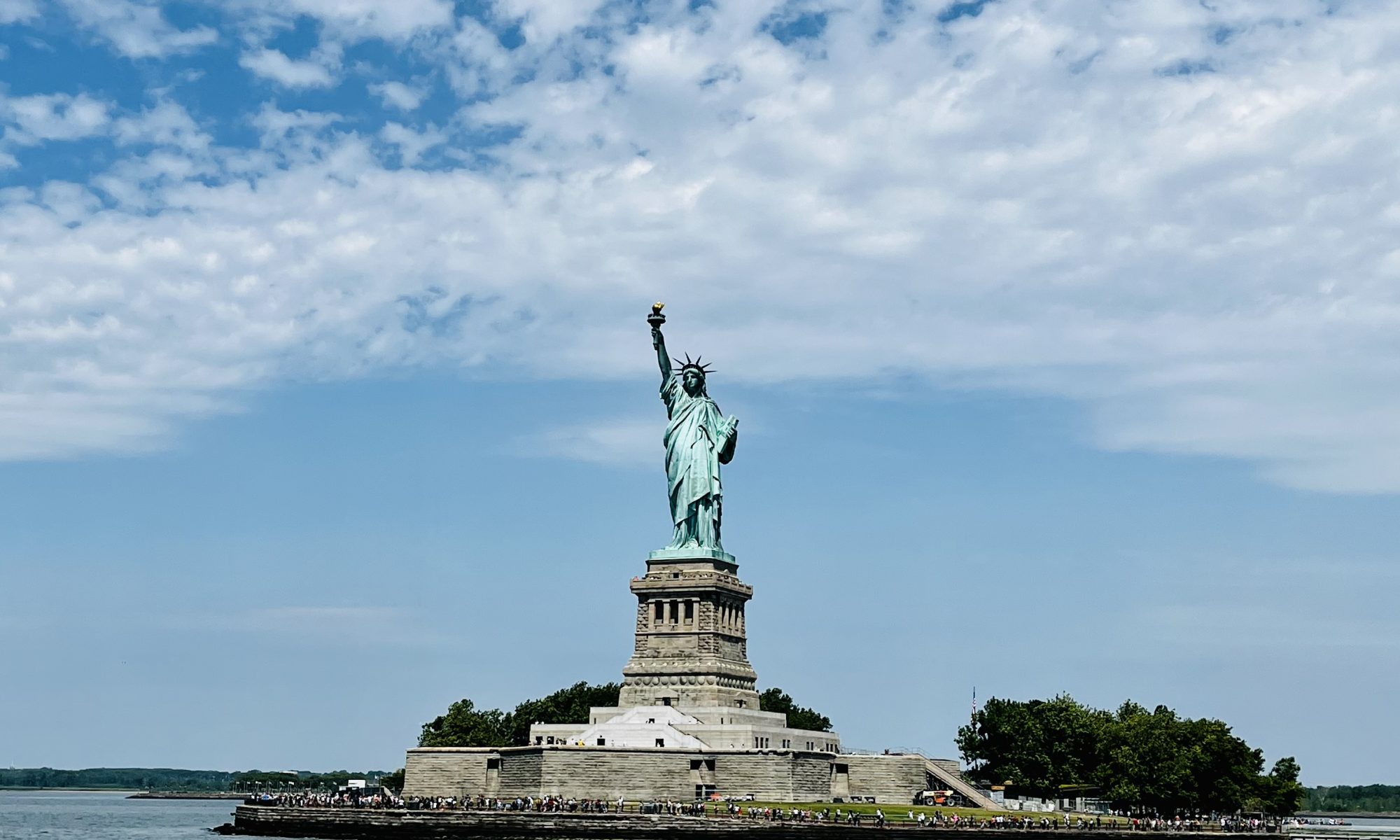 As we rode the escalator up from the depths of the 9/11 memorial, the crowds outside had dispersed and the guards were beginning to place the barriers around the fountains. Being such large landmarks, I assumed they were lit and available to anyone walking by all night. I suppose, for the same reasons, they also become targets of grief and damage, and so ropes go up and officers stand guard.

We decided to continue south, first to Trinity Church and the burial place of Alexander and Eliza Hamilton (surrounded by many of the important figures of American history) and then to Battery Park to see the Statue of Liberty.

Trinity Church stands amongst the towering modern city skyscrapers of Wallstreet. The first Trinity Church was built facing the Hudson River in 1698 but was destroyed in the Great New York Fire of 1776. The second Trinity Church was built in the same spot but facing Wall Street and was finished in 1790. Heavy snow showed the church to have structural problems and in 1839 was taken down on the recommendation of the architect, John Upjohn. Upjohn designed the third church in the same location in a Gothic Revival style. It was built between 1839 and 1846.

Trinity Church stood as the tallest building in the United States until 1869 and the tallest in New York until 1890.

Imagine that world; this church stood as a focus amongst the earthly challenges, the roads muddy with important figures walking to service, sitting amongst the pews. It rose up, giving early Americans hope for something greater. Now Wall Street looms and we continue to look up.

You can almost imagine Alexander Hamilton, in his grave, looking up at the monetary system he created.

Leaving Trinity Church, we continued walking a few blocks down to Battery Park. Artillery batteries were built here in the late 17th century to protect the settlements that became lower Manhattan.

It is surprising when you walk into these green spaces after being in the middle of one of the biggest cities in the world. Dogs play, people read in the grass, and birds drink from drinking fountains.

And there, in the distance, was the Statue of Liberty.

My first reaction was that she was much smaller than I expected her to be. Perhaps it was being surrounded by such tall buildings, but she looked petite and unassuming with monstrous cranes standing taller than she did on the horizon.

The ferries came in and out over the choppy waves and she stood, resolute. We would be taking Statue City Cruises out first thing in the morning to explore her island and then to explore the damaged quarantine hospital at Ellis Island.

From this point at the tip of Manhattan, you can see the Statue of Liberty, Ellis Island, Governors Island, Brooklyn, the Hudson River, Staten Island, Jersey City, and Newark Airport.

We made our way north on the subway to our hotel which stood half a block from Times Square.

Getting off a subway in New York can be disorienting. Without a good sense of cardinal directions, you have to look for street numbers and whether you are on a street or an avenue. It takes trial and error, walking to the next corning and checking each sign.

Our hotel stood next to Times Square and at this time in the evening, it had become full of people jostling their way through crowded sidewalks. The smell of marijuana was often overwhelming as mobile pot trucks were parked along the streets. If you walk a block away from Times Square, the sidewalks sit empty.

We tried to find food beyond the food carts on every corner. Trying to eat without gluten makes it harder for me to eat easily. In our search, we realized our hotel was physically connected to the FOX news studios. You could see the sets and the lights inside.

Another unique aspect of NYC is how unhidden life is. You can watch a show through a window being filmed. Broadway theaters are smaller and more intimate. Actors walk the street to get to their broadway call times before a show.

Living in California, everything is spread out. There is more isolation in our way of living. The movie studios sit behind large gates and huge sets.

Our hotel, the Plaza Riu, stood off Times Square and Broadway. I’m not sure I’ve ever been so high within a hotel, where you can feel the sway when you arrive at your room. It was beautiful and intimidating.

In the morning, I almost forgot what city and country I was in. Our breakfast was provided by the hotel and our view was that of the Church of Saint Mary the Virgin, built in 1868. You could almost imagine yourself in Europe, although my experience of Europe is less blending of old and new.

We made our way to Battery Park and the Statue City Cruises. We were on one of the first ferries of the day, with tickets to a hard hat tour on Ellis Island at noon. You are first required to move through security, similar to that of airlines with metal detectors and x-ray machines.

We made our way to the top of the ferry and looked out over Upper New York Bay. When the ferry was full, we set off across the water to the Statue of Liberty. The ferry moves to the east side of the small island and docks on the south side. There is also a ferry from New Jersey and they criss-cross paths as they lead to their destination.

Due to Covid, walking into the body of the Statue is still closed, however, you can purchase tickets to the base that she stands on. While certainly she stands tall, seeing people at her feet, you gain a perspective of her size. She is not as large as the image I see in my head.

Behind the Statue of Liberty is a small park and further back on the island is a 26,000-square-foot museum dedicated to her, how she was built, and her relationship with France. When we walk in, there is a movie running in three parts: The Immersive Theater-The Story of an Icon. You walk through a circular theater, stopping and sitting for each part.

Leaving the theater, you enter a replica of Frédéric Auguste Bartholdi’s studio, where he built the Statue of Liberty through forms and models. You get an idea of the work that went into such a large undertaking as well as being able to see the original copper color of the design.

From the museum itself, you look out over the Statue of Liberty as she faced the ships of immigrants on their journey to the United States. It’s hard to imagine the number of ships she saw only a bit more than 100 years ago.

That story is actually much more complex than we are often taught, with views towards immigration at the time very similar to views of immigration now. I’m going to talk more about this next week as we make our way to Ellis Island.

After walking around the island, amazed by the views of New York and New Jersey, exploring the Statue of Liberty Museum, and appreciating Liberty’s story, we indulged in ice cream and boarded the ferry for the short trip to Ellis Island.

The ferry again traveled around the east side of the island, giving us a beautiful view of what many of our immigrant family members saw as they made their way to a new home.

The next stop was, for me, essential to our trip to New York; Ellis Island.

Thank you, dear readers, for sticking with me this long. I’ll be writing about my favorite part of our New York trip this next week. I hope you’ll join me in seeing the hidden parts of Ellis Island.

The Church of Saint Mary the Virgin

The Statue of Liberty Museum

360 degree virtual visit to the Statue of Liberty Museum

2 Replies to “The Statue of Liberty”