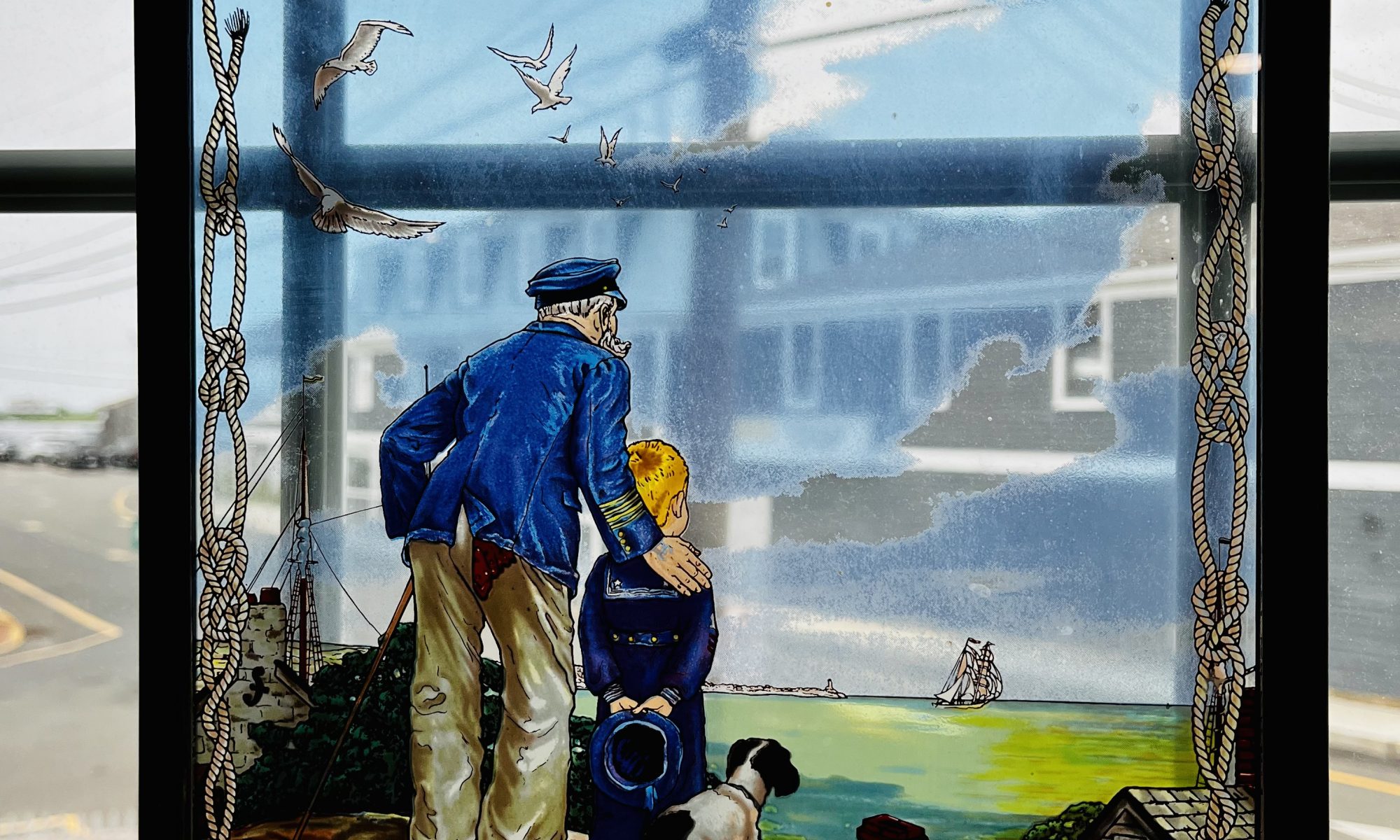 Looking out over the bay as the sun sets, a little house on the dock, I could envision the scene from Jaws where Richard Dryfus begins to load his scientific tools onboard a small fishing vessel; the grizzly old captain watches with part intrigue and part mocking humor. The novel Jaws (and subsequent movie) are inspired by this stretch of sand in the Atlantic and a series of attacks that began here in 1916.

On July 1, 1916, in Beach Haven, NJ, Charles Vansant, 28 from Philadelphia, decided to go for a swim. He took his dog down to the shoreline and entered the water. He didn’t go deep. When he began to yell, others thought he was simply calling to his dog. The reality was a shark was biting his legs. He was rescued by a lifeguard and a bystander and carried to his hotel, the Engleside. He bled to death on the hotel manager’s desk.

While this was the only death in Beach Haven, there were 3 more deaths–Charles Bruder (27), Lester Stillwell (11), Stanely Fischer (24)– and one traumatic injury–Joseph Dunn (12) lost his leg–before the shark, an 8.5 foot Great White (now thought to be a misidentified Bull Shark) was caught and killed. The shark’s stomach carried human remains. Its story still strikes fear into beachgoers. ( You can read the whole story here, or below in my links.)

Beach Haven is also home to the New Jersey Maritime Museum which carries the “most extensive collection of maritime history and artifacts in New Jersey” while working to preserve New Jersey’s long maritime history. One display is a tribute honoring the story of these shark attacks.

One of my favorite aspects of the New Jersey Maritime Museum is their collection of portholes. They are displayed throughout the museum, filling every nook and cranny.

There is something poetically beautiful, something magical, about these portholes. Perhaps it is their history, perhaps it is what they represent. These circular pieces of glass, supported by a metal (often brass) frame, intended to keep the sea out and the light in, shattered and broken, having lived parts of their lives at the bottom of the sea.

Each appears as an art piece, honoring a moment of history. Eyes looked out these windows and, at some point, water rushed in.

The portal to my soul is a broken glass, fractured into memories I can’t shake. Flooding in through the beautiful prism torturing me with the looming feelings of my inevitable demise.

Within the New Jersey Maritime Museum is also a room dedicated to the SS Morro Castle. In 1928, the United States Congress passed the Merchant Marine act which provided construction funds to be given to shipping companies, allowing them to replace old ships with new ones.

The New York and Cuba Mail Steam Ship took the opportunity to build twin ships; the SS Morro Castle and the SS Orient. The company had been transporting mail, cargo, and passengers between New York and Cuba since 1841 (also called the Ward Line).

The SS Morro Castle set sail on August 23, 1930, and despite a worsening depression, maintained steady business. Their tickets were affordable, their clientele treated to luxury, and, in a time of prohibition, they were not limited by US alcohol laws.

On September 5, 1934, the SS Morro Castle left Havanna and began its 58-hour journey up the East Coast. Through the afternoon of the 6th and into the 7th, the clouds thickened and the winds began to blow. That evening, the captain, Robert Rennison Willmott, ate in his room and then died of a heart attack. Command passed to Chief Officer William Warms. Overnight, the winds became stronger as the ship continued up the coastline.

At around 2:50 am, the ship was traveling off the coast of Beach Haven, NJ when a fire was discovered in a storage closet of the 1st class writing room. To this day, the start of the fire is unknown–theories of arson and insurance fraud persist. Within 20 minutes, the fire burned through the electrical cables and the ship lost power. Within 30 minutes, the ship was engulfed. A single SOS was sent before the ship lost power.

The waves from the storm were high and unyielding. The water was deathly cold. Those who jumped with life rings were often knocked out as the rings hit their neck or head upon entering the water, causing them to drown or die of a broken neck.

Six lifeboats were launched with a capacity for 408 souls. Only 85 people, mostly crew, were saved via lifeboat. The ocean swells made seeing bodies difficult amongst the waves and rescue near impossible.

The single SOS signal lead to a slow recovery. People lined the New Jersey shoreline and collected bodies, helped with the wounded, and cared for those brought in by rescue boat. 135 out of the 549 on board were killed, as well as an unknown number of castaways (mostly children) escaping violence on the streets of Havana.

The ship was towed and beached on the shore of Asbury Park boardwalk, where the burned-out hull became a tourist attraction. It was later towed to Gravesend Bay and eventually scrapped in Baltimore on March 29, 1935.

While each of these images deserves time and attention, I don’t know all of their stories. These are a few things that really stood out to me at the New Jersey Maritime Museum; old flags to models, art, old fire extinguishers (glass balls filled with repellant), displays, ship funnels, and enormous painted lobster claws.

I hope you enjoy these photos and they allow your imagination to soar.

The Mystery of the SS Morro Castle – Ripley’s (great photos!)

YouTube video of the Morro Castle – salvage film from 1934

What is a Ship’s Deadeye

My Creative Muse and the Afterlife

Sign up for my Friday Newsletters with Updates from the Week