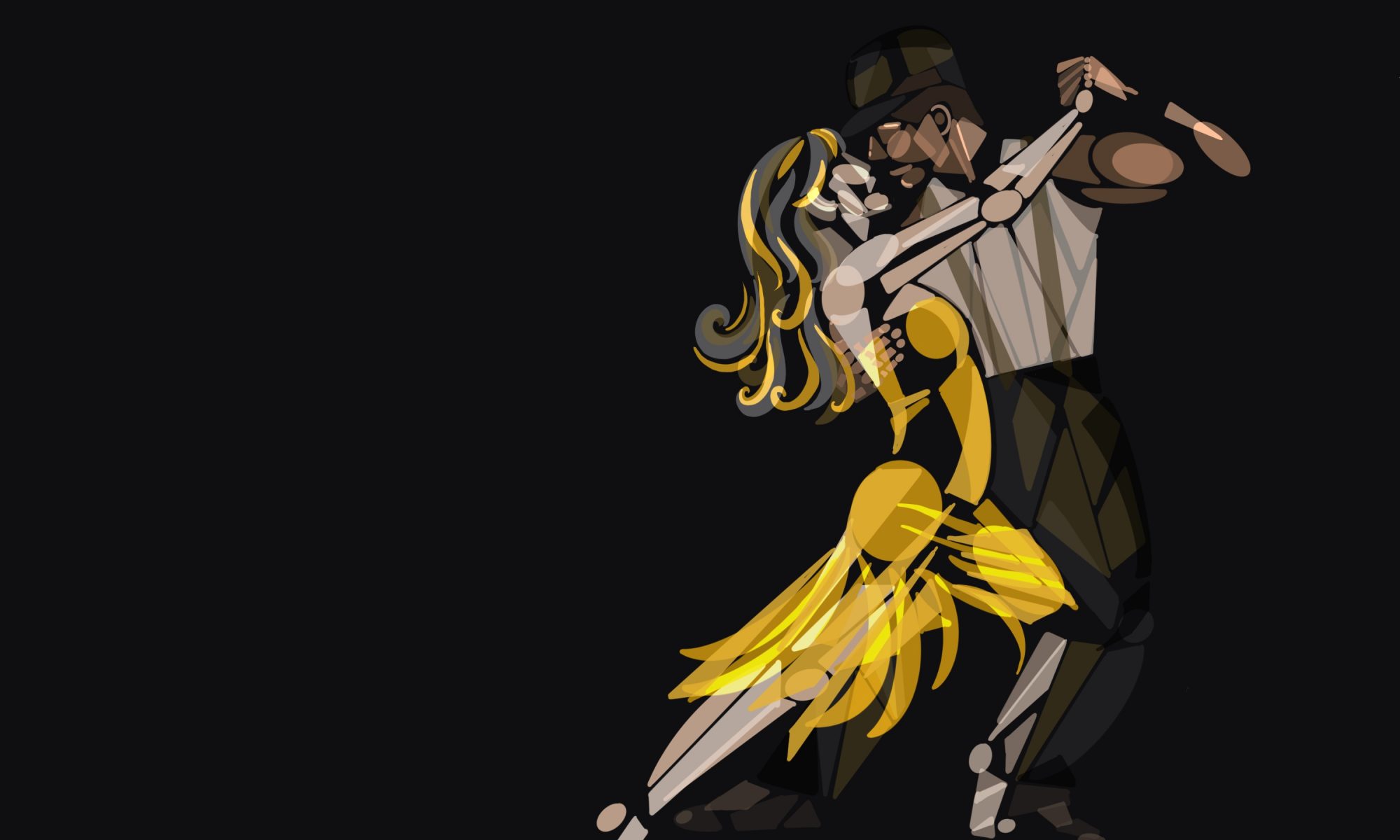 He grabbed me by the waist and pulled me tight against him, a quick snap at the accented staccato as the sextet played on the stage. His arm cradled my back, the roughness of his chin pressed against my temple. The tango was slow, my feet tracing the wood as this man guided me from my place on the floor. His body pressed against me. I could feel the shape of him. The shape of a stranger and not my beloved. My Andriy.

He was left torn.

I was left torn.

They were coming and we decided to stay. We would be brave, it was all we could be. We thought we would photograph and blog and share it with the world. We would document the atrocities. We would be safe in the basement of the club, almost a second home to us now.

Our apartment was gone. Destroyed. But we would not leave. Our weapons were information. And then our weapons were guns. And then bottles filled with rags and gas as the tanks rumbled down our streets.

He turns me about the floor; tracing our toes, walking in a dramatic embrace, with flicks of our feet. His left arm is bent as he holds my right out. He is a grizzly bear in my arms; large and thick. He wears the pants of a soldier but has removed his coat. Sweat glitters on his brow.

I see the shadow of my Andriy, sitting alone in the corner.  Watching me.  The smoke of his cigarette lingers and I can still taste it on my lips; invisible now.

I remember when he taught me to shoot, his hands on my arms, guiding me to hold the butt of the gun tightly into the nook of my shoulder.  I remember his arms, holding me as the world exploded around us.

My dress is short and tight, with a torn ruffle at the slit.  My shoes are tall and scuffed.  How long have I danced here in these shoes?  Will I continue to fight in these shoes?  Or will they end up bloody in the street?

The music picks up its pace as the violins moan their grief of this cruel war and my lost love.  He presses his mouth against mine, bruising me.  I don’t pull back.  I meet him with equal intensity.  He begins to move me off the floor, towards the shadow of my Andriy, smoking in the corner.

We are mothers and wives, we are scientists and seamstresses; we could have left, but we chose to stay.  There is diversity in our choices; to give our children a better future, to support our men who cannot leave, but mostly because this is our city.  This is our home and we will fight to protect it.

This man is pressing me back and as we pass my love, sitting alone at a table. I reach out to him, wishing he was clear and real and alive; not some ghost of a memory.  I want him to rip me out of this man’s arms.  I want his lips to be on my lips.  His body pressed against mine.  Not this poor substitute.

My hand reaches out and moves through his cheek, Andriy’s cheek, with no resistance.

His eyes focus on me, only for a moment, and I think perhaps he is real.  Perhaps he can see me.  Perhaps I will finally leave this place with him, the music pulsing in four-four time with my beating heart.

Andriy sits in the corner at a broken table, watching the shadow of their old life.

In this empty club; the windows have shattered and the snow falls through the roof.

He can almost hear the echo of the music, of the tango, when he first met his Bohdana, his gift of God.

He can see her in her yellow dress, tight and short with a torn ruffle at the slit.  Her high heels are spiked and scuffed. He can see her in the uniform of a fighter, the gun pressed against her shoulder.  He can see her blood, lift like a balloon into the morning sunrise.

He watches her shadow dance, begging him to join her.  She moves toward him in the movement of the snow and the tumble of the dead leaves across the floor.

The wind moves through this empty building and he can almost hear her voice whispering in his ear; my Andriy. Her cold caress against his cheek as the snow falls about him.

He stands and leaves through the hole in the wall, into the empty frozen streets;  the memory of his Bohdana and her undying love.  The memory of everything she was willing to fight for.

When I started writing this week, I saw the tango between a ghost and the lover who has lost them. I imagined an old house and someone coming home (I had not decided husband or wife), alone, with the spirit of their lover still embedded in the house; watching and listening. In their grief, the living person puts on music and begins to sway. Slowly, the ghost begins to dance with them, becoming a tango as the protagonist cries in their grief.

While I imagined my characters dancing in the house, I began to wonder what the story would look like if the person coming home was actually the ghost, going through their routine, not knowing they were the one who was dead. (Perhaps even the idea of walking through life like the dead; simply keeping the routine.) What if the character we think is the ghost is the one grieving? What if they sit there every night, hoping their lover will open the door one last time?

This is where the idea of Andriy and Bohdana began to be born; who is the ghost and who is the grieving soul?

That then brings up a deeper philosophical question about what it means to die and what comes after. What is our understanding and experience around death and grief? What if our reality isn’t… real?

Because I live with a sleep disorder that affects my perception at night, I often wake up thinking about these questions of reality, of life and death. I often “die” in my sleep (as my brain and body perceive it) and I wake up in a panic, thinking either I am dead or the people I love more than anything have died. It often makes me question my reality and how the brain interprets stimuli. A few nights ago, I woke up screaming as I threw my body over my daughter who had fallen asleep next to me. I was trying to protect her from the bombs, or perhaps a nuclear blast.

I wanted Andriy and Bohdana to find each other, but that wasn’t this story. And it breaks my heart that it wasn’t their story.

My featured image is a drawing I made of Andriy and Bohdana dancing, not Bohdana with the “grizzly bear” of a man. I wanted the image to be the love between them, the passion they felt for each other before their lives changed. One a ghost, and one the living.

This story was also, very clearly, inspired by and influenced by Russia attacking Ukraine. Bohdana is a Czech/Ukrainian name meaning “God-gift” and Andriy is the Ukrainian name for Andrew, meaning “warrior”. I stand with the Ukrainian people. I have been deeply affected by the woman taking up arms, staying to fight for their country; by maternity and children’s hospitals being bombed.

As a small side note; this prompt asked me to use the term “grizzly bear.” The bear is also a symbol of Russia. While Bohdana dances with the large and muscular man, I don’t make clear, and I don’t necessarily think it’s essential, to identify if he is a Russian soldier or a Ukrainian one. This is her reality and what matters is that it isn’t Andriy. However, the idea that in death she is dancing with those who took her life felt powerful to me. So, the reference to him being a grizzly bear is a connection to his size while also acknowledging the role of Russia.

My great-grandparents were Russian immigrants/refugees in 1906, sailing through Galveston, Texas, and settling in San Francisco. They were Russian Molokans, “Spiritual Christians” with practices similar to European Quakers and Mennonites. While the stories of why they left were certainly very different under the Czar, I still feel a deep connection with the Ukrainians, and my heart breaks for them.

I have included the link to the Immigrant Voice Story of Alexandr Babashoff, an explanation of the Molokan journey when they left Russia.

If this story touched you, if you liked it, please share it with someone you care about. If you’d like to read more and would like weekly updates, please sign up for my newsletter here.

I have considered putting my new artwork on Redbubble, Society 6, or in my personal store on this site. I am curious about what sites you trust the most. If you would like to see a piece of art on a specific product, please comment below.

I have recently updated the comment section on my site, you should receive an email when I respond. (Still working on this and would love feedback if it works or not.)

“We just wanted to be together,” says Ukrainian couple who rushed to marry amid attacks

My 52-Week Journey So Far

What is the 52-week short story challenge?