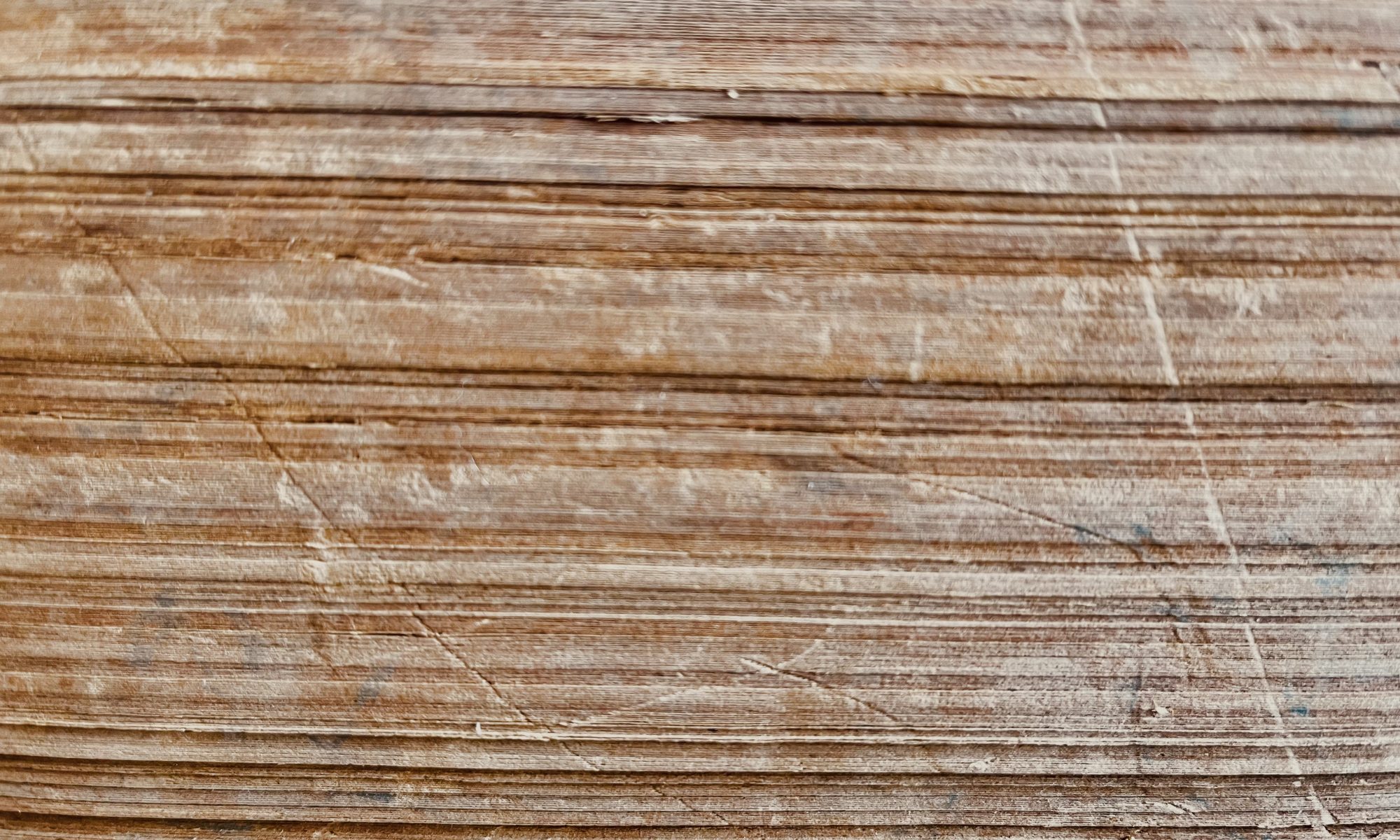 I discovered a treasure this weekend.

Not the shiny gold or silver sort of treasure. It wasn’t jewels or money.

This treasure had been passed over by all the people exploring the space before me. Even I didn’t see it at first.

It was almost like a magical artifact waiting for its person, sitting alone on a table in clear sight. I walked past it several times until, as if in a fictional magical novel, it showed itself, glimmering in my peripheral vision.

The book sat, four inches thick, eleven inches tall, waiting to be discovered. Its cloth cover torn and stained. (All the better to put you in a place of honor on my shelf.)

How was I the first to pick up this book? I wasn’t early to the sale. The crowds were thick and book collectors had been there when the doors opened. Our local Friends of Library had even allowed volunteers an early first look.

And yet here she sat, this book, waiting for me.

Encyclopedia of Practical Information and Universal Formulary. A Book of Ready Reference For Every Occupation, Trade and Profession. By Robert Bradbury, M.D., Author of Bradbury’s Medical Encyclopedia, Cox’s Physiology, Etc., Etc., and Late Professor in the Manchester Library and Mechanics’ Institute, England. Eight Volumes in One. Chicago: The Century Book and Paper Co. 1889

Her pages were delicate, her spine broken and unattached. They had her listed at only $8 which made my decision easy; she was coming home with me.

It felt like stepping back in time. The author speaking to me of a period just after the city I live in was settled.

1889 was a time of exploration, of settlement, of opium, of gunfights.

Tehachapi, where I live and where this book appeared, was preceded in the 1870’s by a settlement called either Williamsburg or Tehichipa. Before this settlement, it was the land of the Kawaiisu, a Native American Tribe of people who lived in the Tehachapi Valley and into the Southern Sierra Nevadas. The Kawaiisu people spoke the language “Tehachapi” which is a division of the Uto-Aztecan Language family.

In 1874, the Southern Pacific Railroad began to build what was considered an engineering feat of the day, what was to become known as the Tehachapi Loop, a literal train loop that eases the grade over the Tehachapi pass by allowing the train to pass above itself in a large circle. It is considered one of the seven wonders of the railroad world and is a national historic civil engineering landmark.

Did my book come up over the loop?

The landmark sign which looks out over the loop states:

The Tehachapi Pass Railroad Line was cut through solid and decomposed granite by up to 3000 Chinese laborers from Canton China. They used picks, shovels, horse drawn carts and blasting powder. This line, which climbs out of the San Joaquin Valley and through the Tehachapi Mountains had 18 tunnels, 10 bridges and numerous water towers for the old steam locomotives. It was completed in less than 2 years time under the leadership of civil engineer J. B. Harris, Chief of Construction, a remarkable feat.

This line was part of the last and final link of the first railroad line connecting San Francisco to Los Angeles. It was a primary factor in the early growth of the City of Los Angeles and the State of California.

This single track line, essentially unchanged, is still in constant use today, 122 years after its completion. It passes an average of 36 freight trains each day. This attests to the superior job of both engineering and construction done by the two civil engineers and the Chinese laborers.

The city of Tehachapi itself was incorporated in 1909, originally known as Tehachapi Summit.

I imagine the years in between the railroad arrival and the city incorporation. I imagine the people; cowboys and settlers, Chinese immigrants, wives, children, prostitutes.

Did this book climb the Tehachapi pass in the bag of someone on a train coming to settle at the top of the mountain? Was it kept on the shelf at the little train station downtown? Perhaps a local doctor kept it in their office? Perhaps there was a Madam who kept it in her room. Maybe there was a schoolmarm who used it to teach her students to read.

Who could have read this type of book only 10 years before the turn of the century? Who had the education to read its pages?

In the year 1889, the year this book was published, President Grover Cleveland signed a bill admitting North Dakota, South Dakota, Montana and Washington as US states.

In March, Benjamin Harris became our 23 president and the Eiffel Town was inaugurated in Paris.

On April 22 at “high noon” the Land Rush of 1889 formed Oklahoma City and Guthrie.

In June, Vincent Van Gogh painted The Starry Night and the first long distance electrical power lines in the United States were completed, running 14 miles between a generator in Willamette Falls and downtown Portland, Oregon.

On July 8, the first issue of The Wall Street Journal was published in New York and the last official bare-knuckle boxing title fight was held lasting 75 rounds in Mississippi.

In August, the United Kingdom passed the Prevention of Cruelty to, and Protection of Children Act, imposing penalties for abusing a child.

In September, Nintendo was founded in Japan to produce and market playing cards.

In October, the Moulin Rouge opened in Paris. (Credits to Wikipedia.)

This is the world in which this book was published. She has seen some 133 years of change.

Her author, Robert Bradbury, M. D., writes in the preface:

Knowledge is the common property of the human race. Science has lately become disseminated among the great masses of the people, far beyond the dreams of the most sanguine. Great truths and the teachings of the sages remain no longer peculiar to the savant, and the property of the few. The public press has become a mighty power in the land, throwing off and scattering abroad the mature thoughts of the scientist, and daily becoming more and more a blessing to the nation.

…No thought that is elevating to this generation is thought unworthy of notice, and sealed books, heretofore accessible to none but the favored few, have been opened, the storehouses of learning have disclosed a wealth free to all; so that now every man who thirsts may drink freely from the fountains of knowledge, and be satisfied.

The compiler of this work unhesitatingly recommends the pages of his book to every workman in this country, as a ready reference in every emergency, and as a work containing such an amount of information and congregated mass of scientific facts which were at one time only obtainable at the feet of the safe or votary in the temple of science…

The best writers have been consulted and leading authorities freely examined touching the many different branches of the useful arts and professions, and as a necessary consequence, works native and foreign, works expensive, and such as usually occupy the library of the wealthy only, have been consulted in this compilation,…

It will be observed by the intelligent reader that our aim throughout the work has been to avoid as much as possible all unnecessary abstraction, such as usually enter into the body of works of this description. We have chosen rather to make the book in every sense a truly practical work, always attempting the briefest for of expression consistent with cleanest and accuracy, and an avoidance of all technical terms and phrases that usually act as an impassable barrier to the unscientific.

Our aim has been to bring the book whiting the means of the artisan and mechanic, and in typography and general execution worthy of a place in every man’s library…

Its bearing in the various branches of the industrial arts, whether it be pertaining to husbandry, the smith, the carpenter, the engineer, the mason, the iron founder, brass founder, or workers in steel and iron, each department will by found rich in good business formulas and practical advice…

And so, dear reader, I share with you the first bits of this treasure; the words from a world 130 years ago and how they perceived their lives.

While I may or may not do another full post about the Encyclopedia of Practical Information, I am genuinely very excited about the treasure trove of historical information inside. While doing other blog posts (art, life, memoir), I will be adding tidbits of treasure at the bottom of my posts… and yes, there is a recipe for Wine of Opium.

I publish a new blog every Friday. If you’d like to read more, or have particular interest in the Wine of Opium, please considering signing up for my newsletter here.

History of the Tehachapi Loop