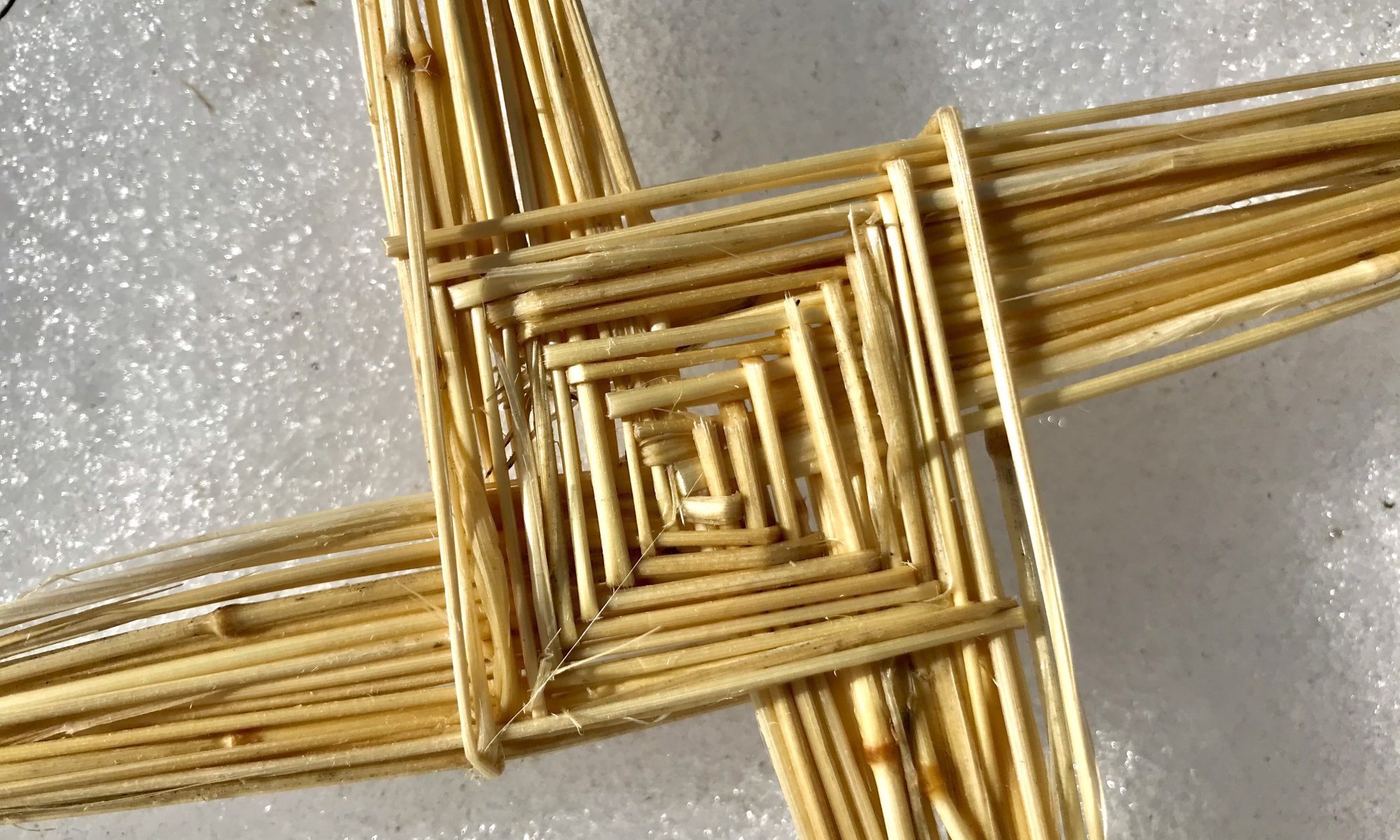 What is Imbolc? I want you to imagine a time long, long ago.  Before electricity, before the invention of canning (1809, France).  Go back further, 1,000 years.  Perhaps another 1,000 years.  It is winter, you huddle around the fire in your home, the walls made of timber, the roof is thatch. You are running low on fuel to burn.  If the snow becomes too thick, your roof may collapse. A stray spark could burn everything to the ground. You live in Northern Europe or the British Isles in a single room home with your husband, your children, your pregnant sister, her spouse, and her children.  Your parents and in-laws may live there as well.  Should fire swallow your home or your roof collapse, it is likely that your family will die from the cold.

You aren’t the only ones surviving in this room, the animals that keep you alive live with you over the winter.  They are family and must survive the winter with you. If they were to die, you would be left without the cycle of food and life come spring.  It is too cold and requires too much energy to leave the animals out in their barns.  You would have to push through the ice and wind to feed them, and they may die from the elements.  With them in your home, you can feed them and care for them and they add to the warmth.

Within your home, you also have the food which must make it through winter. Some of it is beginning to rot, the mice who have made this their winter home nibble on what they can find.  Your foods are salted and fermented, dried, and sometimes stored in the freezing weather outside. There is nothing fresh, other than occasional meat or fish when the weather is forgiving, and the land provides. When the ground has thawed, it will take time for the seeds you have saved from last year to grow.

You boil snow water over the fire with the last of the dried herbs for tea.  There is still rationed mead or beer or wine to help you push through the last winds of winter.

But the bellies of the sheep are growing fat.   They are short-day breeders, which means that their tides flow with the shortening of the days in the fall.  Sheep naturally breed in late September and October and have a 5 month gestation, bringing the birth of the first lambs in-between the Winter Solstice and the Spring Equinox.

One of your ewes is in labor, and you watch as she births a new member of your extended family.  With the tiny lamb comes fresh milk.  This milk is the first fresh food you and your children have had since harvest and more lambs are on their way.  Your sister too is preparing for labor; this baby is a child of the Beltane fires which brings birth near the beginning of February.  It is a common time for birth, yet precarious as the winter is still very cold with high infant and maternal mortality.

As the lambs are born, your family now celebrates the small light at the end of a still long tunnel.  You now have milk, and from the milk comes butter and cheese.

This is Imbolc, also called Oimelc, Imbolg, and the Feast of St. Brigid.  It is the minor Sabbat which falls midway between the Winter Solstice and the Vernal Equinox.  It is celebrated on February 1 and is the predecessor of Candlemas on February 2nd, an example of Christianity using the traditional pagan holiday’s to convert the ancestors.

The first milk told the ancestors that the grass was beginning to grow under the snow.  The animals could return to the fields and their barns, allowing you to clean the stagnant smell from your home (the origins of spring cleaning, quite different than today’s interpretation).  There was hope in site as the bulbs began to show their tips.

In today’s culture, we are very removed from the hardships of nature.  We still live at it’s mercy, but it is not a part of our continued survival.  For the Celtic people, Imbolc was the promise of spring. It represented cleansing, renewal and birth.

Brigid is about transformation, just like Imbolc.  She is of such great importance in Celtic mythology, that when Christianity came to Ireland, she could not be forgotten or pushed aside or dismissed a myth; she became St. Brigid.  She was no longer a Goddess, but the midwife to Mary as she birthed Jesus.  She was also known as Jesus’s foster mother.  This allowed her to keep her power and connection to childbirth.  It is said that she healed lepers using water from her well and blessed Jesus with 3 drops of water (Goddess of the Sacred Well).  Within her Christian story, she was born on February 1st, Candlemas Eve.  Some say she was born at dawn in a pillar of fire, keeping her connection to flame and transformation.  Christianizing the Pagan beliefs made it easier to convert to Christianity.  When Irish and Scottish servants went to the Caribbean, her story went with them and she was adopted into the Voodoo religion as Madame Brigitte.

Brigid embodies survival, just as those who honor her have survived the hardship of winter. She has transformed from Goddess to Saint and back to Goddess.

Consider what life was like for the Celtic people and what this celebration meant for them.  It meant survival.  In our lives today, dependent on electricity, warm in our homes, with markets and delivery, we are not limited by nature.  We do not need to bring agricultural animals into our homes to survive into the next year.  Few of us live in Northwestern Europe, and many of us struggle to understand what that life was like.  Living in California most of my life, snow was a unique and special experience. Extended bitter cold was a rarity.

Due to this, Imbolc is often forgotten or not celebrated as much as the other Sabbats.  We don’t connect with this one the way we do with Samhain (Halloween) or Yule (Christmas). This one is the in-between as we look forward to the spring equinox (Easter).

Yet we can look at the intention of this sabbat and how important it was to the ancestors.  Spring was still distant, but the signs for it were coming.  Travel was difficult, community was limited.  For this reason, Imbolc is a more private, family focused celebration.  It is reflective and personal.

Ways to celebrate Imbolc are in paying attention to nature.  Go for a walk and look for the first signs of green.  Create new plans.  Clean.  (You may not be sweeping out the manure of your sheep, but there is probably clutter that has accumulated over the winter months). Plant a seed, whether that means physically, emotionally, or spiritually.  In planting seeds, think of the care that it needs to nurture the seed past the beginning stages of growth.  This goes for that project you’ve been wanting to start or the relationship you are wanting to grow.

As Imbolc celebrates the first milk and the hope of surviving winter, this is an opportunity to follow in the traditions of the Celts and make butter, simple cheeses, yogurt (which ancestrally would have been clabbered milk) and simple breads . Instead of copying established recipes, I’ve linked several here for you to try.

How to Make Homemade Butter

How to Make Buttermilk

Imbolc also celebrates Brigid, or St. Brigid’s Feast. Creating Brigit’s cross is a simple craft that can be done with natural grasses or even pipe cleaners. In creating Brigid’s cross, I gathered dried grasses from the field and soaked them overnight in snow that has survived from our last storm. You don’t need to use snow, but as a way of honoring the tradition from winter to spring, it’s a nice option if you have it. Brigid’s crosses are traditionally hung over windows or doors to protect the home and family members from fire, evil, and hunger. Some traditions believe in putting the cross out on Imbolc Eve to receive Brigid’s blessings, others burn the old cross on Imbolc and create a new one each year.

How to Make a St. Brigid’s Cross

A bit about me – My most important blog

Tending Brigid’s Flame: Awaken to the Celtic Goddess of Hearth, Temple and Forge

Brigid: History, Mystery, and Magick of the Celtic Goddess

One Reply to “What is Imbolc?”

Be the first to receive updates, stories and mandalas.